The famous out of print collector’s 1985

Classic Edition of the original… 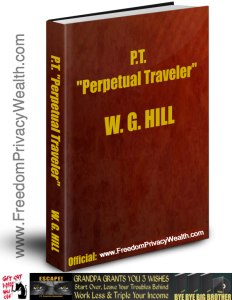 The ultimate way to avoid government control of your life and your property is to become invisible.

Ideally, you should never “belong” to any one government.

how you make your money,

where you keep your assets,

and perhaps most important, where you like to “play.”

PT a Coherent for a Stress-free Healthy and Prosperous Life Without Government Interference Taxes or Coercion.

The philosophy behind these ideals is to become a “PT,” that is, a Perpetual Tourist, Parked Temporarily, a Prior Taxpayer who is now a Possibility Thinker and Prepared Thoroughly for the future.

Want to save money?

With over 50 years in the biz, no one questions our “Grandpa’s” superior knowledge & expertise.

“Grandpa” is arguably The World’s Leading, #1 Expert on:

by W.G. Hill and Harry Schultz.

The Origins of PT

For thousands of years, people in power have been able to con the vast majority into giving their money and even their lives to supposed higher values. Those who become aware of the con are labeled troublemakers. Depending on the time and circumstances will be ostracized, jailed, tortured or killed.

The wise man or woman always look carefully when asked to give his time, money or even recognition and support to any cause, country, ruler, Emperor, religious-charismatic guru, nation, kinship group, true faith, society, club or lodge, and especially to “society”.

The threat of people acting in their own enlightened and rational self-interest strikes bureaucrats, politicians, social workers and many members of official churches as ominous and dangerous. Usually, with great success, they con everyone into believing that personal sacrifice, unselfishness, service, and subordination to the group are the only virtuous and respectable ways to live.

Individuality and the possibility that people will not always accept the pronunciations of authority are labeled anarchy. Such ideas are strongly discouraged. Rejection of group values is cause for the most severe punishments. This condition has meant that through the ages, every group or organized society has methodically suppressed and destroyed its most original and talented thinkers, just because they were different. The bullies, lunatics, and fanatics who often reach positions of power and leadership find no shortage of underlings willing to wage wars. They persecute those with unpopular views and generally make this world a dangerous and unfree place to live.

The vast majority of people in the world are followers, mere sheep with no particular desire for freedom, nor any wish to be allowed to think for themselves or provide for themselves. They want to have leaders, gurus and to be told exactly what to do and how to think. The majority want someone to take care of them, to make decisions for them and to have the security of belonging to a group, a country, a church, a club that will protect them. They have low levels of self-confidence and a great respect for authority.

They have been conned.

If I have just described you, you have no PT potential. You believe that sacrificing yourself is the only way to live. You don’t have much sense of personal identity, nor any confidence in your own ability to take charge of your own life and achieve anything of importance. You don’t want the freedom to make your own decisions, to come and go as you please.

You probably feel hostile and threatened that anyone else could think differently than you do because, as part of your philosophy, you don’t respect the right of other people to march to different drummers. You are sure that your religion is the only true belief. Deep down you know that only your skin is the right color. You are sure that your morality is where it’s at and at only your country is worth fighting for. Additionally, you feel that everyone should pay his fair share of taxes, even if it hurts. After all, we are on Earth to help our fellow man and we have to do it as a group.

If the above sentiments fit your belief system,

don’t bother with the PT philosophy.

This report is not for you!

“I was contemplating suicide & at the lowest point in my life when I gambled a hundred bucks on Hill’s P.T. books. The life altering P.T. Plan gave me hope when I needed it. Then, with the author we worked out an escape plan just for me. In six months I was free of creditor’s claims & an unwarranted criminal charge. My divorce was favorably resolved. New-found freedoms abroad eliminated stress & all health problems. Net result? A new start in a new country – New Opportunities & a new life partner-actual picture below. Lost income replaced- and then some. Financial independence, plus happiness achieved. No miracles: All it took was learning the P.T. Secrets, positive attitude, & effort.

Hill’s P.T. Material here, will introduce you to options you never considered. Hopefully, it will change your life — as it did mine.
P.T. Newby , Monaco “

A book – called simply P.T. (short for “Perpetual Traveller”), by a mysteriously named Dr WG Hill, was bound in red leather, with the letters “PT” embossed in gold – and a hefty US$100 price tag! But the ideas in that book shook my world – and gave me hope at exactly the time I needed it. It was the best $100 I ever spent.

I had been morose, pondering my stupidity and my fate – which, for a man in his forties (who had lost everything), seemed like an impossible situation. I couldn’t imagine HOW I could climb out of that black hole. Every time I considered the idea of working hard, even having two jobs, in order to pay back my debts AND pay my living expenses – I was consumed with despair. Why? Because I knew the harder I worked – the more I would be financially punished by the government, via the tax system.

Sure, I could have declared bankruptcy, handed in my passport, and become a ward of the state. But as someone who wanted to work my way out of debt – it appeared the system was stacked against me. That’s where this inspiring book, PT came in. It showed me a way to escape, a way to build a new life – without the deadweight of government restriction and taxation. It was my lifeline.

I was immediately aware this information was dynamite. Why hadn’t I ever heard of such an obvious “Six Flag” escape strategy before? Why had it taken me so long to find out that such ideas actually exist? There and then, I realized I could build a “new” life on the basis of the ideas in this radical book. I could also use my own experience in doing so, to build a new business – and help spread this valuable knowledge to others who might equally appreciate it.

That was at the beginning of 1998. Within one year of working full time and starting my new business, I’d paid off all my debts. Within two years, my new business was earning three times more than my old day job. So I quit the job – to focus on my passion. Within three years I had saved over US$100,000. By then I was ready to plan the next stage of my strategy – to exit the “old” world and enter the new, by becoming an international citizen and “P.T.”

Everything was in place. I had spent three years reading voraciously. I had worked my butt off. I had paid off my debts. And most importantly, I had created the means –a Portable Trade— by which I could support myself financially – anywhere.

It was time to move on, and that is exactly what I did.

I’ll always remember that first day in my new country. I arrived at the apartment building I had found on the internet – and was busy unpacking my single suitcase of belongings. I was truly travelling light. Then I went outside and walked down the road – deciding to check out my new surroundings. The sky was blue and the sun warm on my face. It was like I was on drugs. A “freedom high”. I was literally bouncing along, with a big grin on my face and an ecstatic sense of the present moment. It’s a feeling I’ll never forget.

This is based on an original document as published in The PT Book by W.G. Hill. A few parts have been updated by Grandpa to reflect new historical developments.

The Complete works of W.G. Hill and Peter Trevellian. 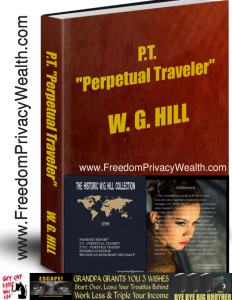 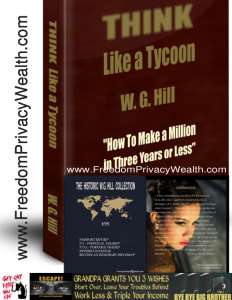 How You Can Become an Honorary Consul General

HOW TO BECOME AN HONORARY DIPLOMAT 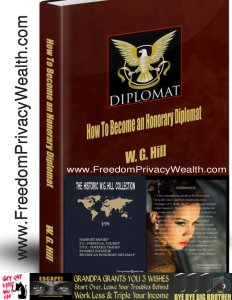 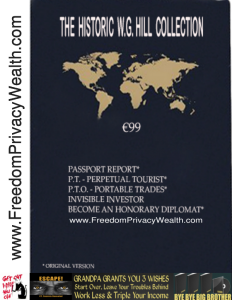 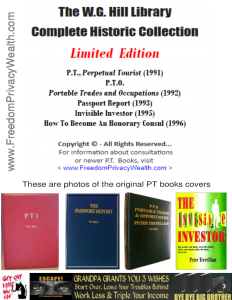 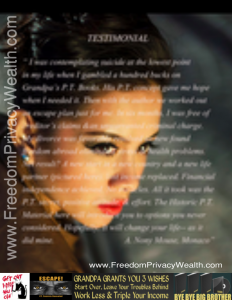 OUR 1ST BIT OF ADVICE TO SEEKERS OF RELIABLE INFORMATION: 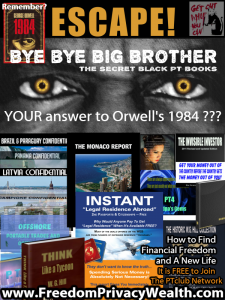 Does the source where you seek good advice have real experience and knowledge, or is he/she just another fraud or copycat stealing the ideas of others? Or worse yet, just making stuff up as they go along?

Doubtless, his slim volume will be imitated by the usual crowd of plagiarists. As they have never walked the walk, their advice will be mostly worthless. Unlike our imitators, your author Grandpa has been writing similar books and advising hundreds of clients for the last 5 decades. He has personally been through the wringer a few times & has emerged clean and dry and alive.

Fifty years of helping consulting clients successfully work through their problems have taught us a few things. We will be passing on this information to you here… Every paid-up reader who bought this & who needs additional personal help can get a short, personal E-mail consultation from Grandpa.

Fugitives have special problems. Now it is time to realize that in these times of universal surveillance, arbitrary arrests, kidnaps, special renditions, torture, prosecutions and even killings of citizens without trial, the rest of us share the same problems as fugitives. We must all learn to shield ourselves from Big Brother governments . . .

STOP FOR A MOMENT AND THINK:

YOU’RE NOT GETTING A “BOOK”.. YOU’RE GETTING OVER 50 YEARS OF GRANDPA’S EXPERIENCE… AND HUNDREDS OF YEARS OF OTHER EXPATS’ TRIAL & ERROR… CRAMMED INSIDE EASY READING PAGES CHOCK-FULL OR ACTIONABLE ADVICE.

For Beautiful Women More Money And
Other Good Things In Life, 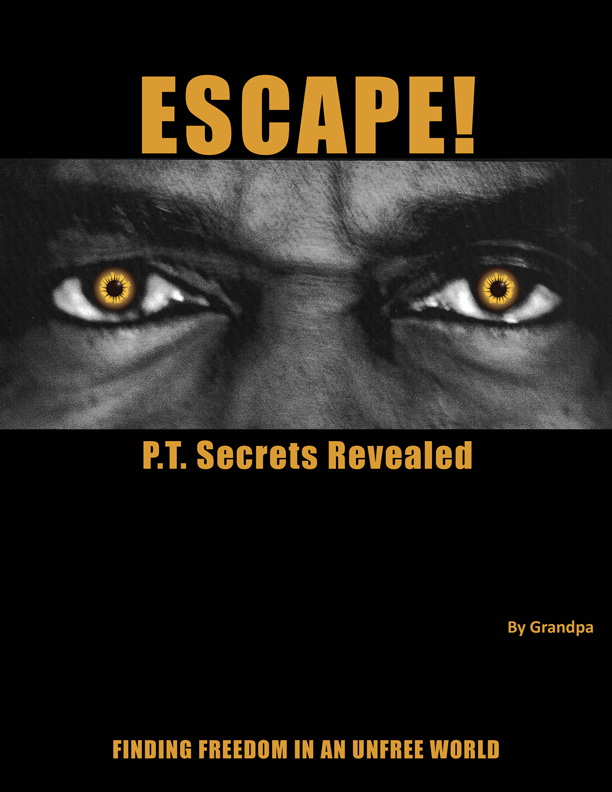 IN THIS SPECIAL REPORT WE WILL SHOW YOU HOW TO FLY UNDER THE... Read More 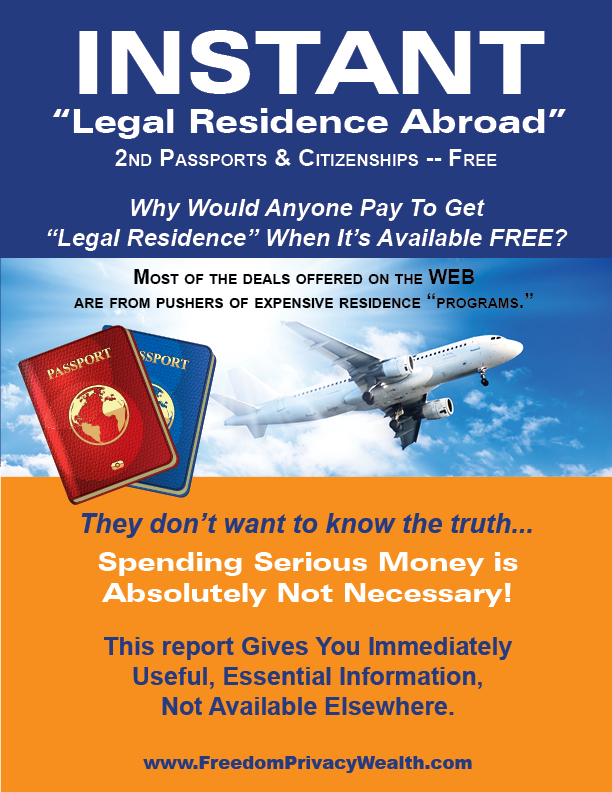 WHY WOULD ANYONE PAY TO GET “LEGAL “RESIDENCE” Read More 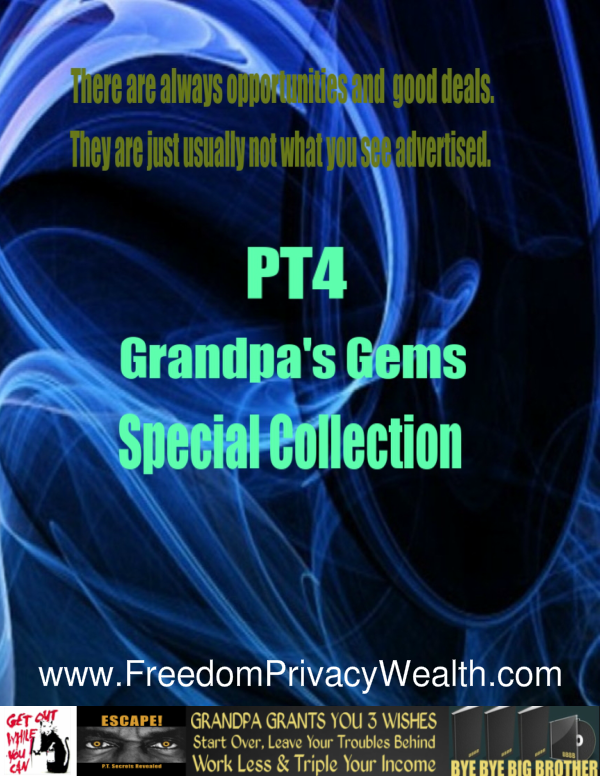 We explore how you, dear reader,  can... Read More 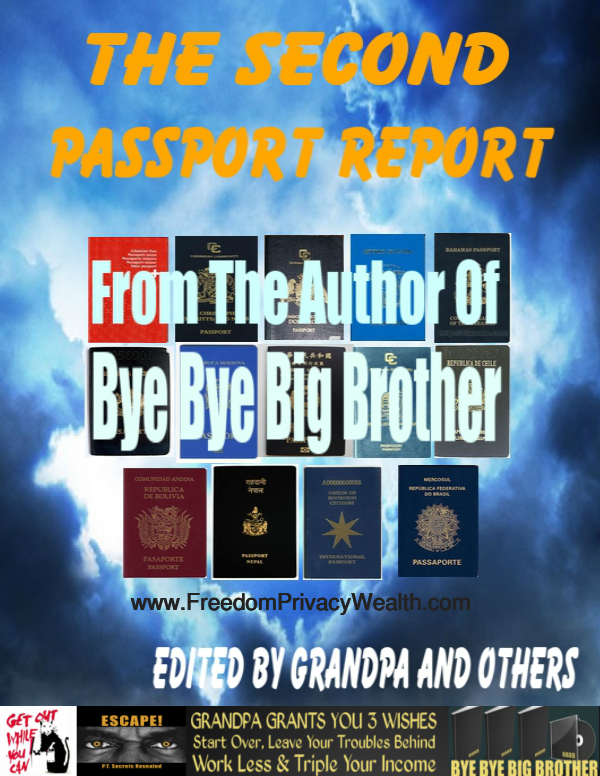 In this report by Grandpa & Others,
you’ll find out why you need a
second passport or citizenship – and
more importantly how you... Read More